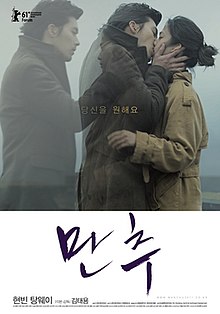 This was not a normal role for our beloved Hyun Bin.  He portrays a bad boy gigolo (Yah, I know -so out of his normal acting).

Now, what did I think of it?  Hard to explain, because I’m not sure.  It is a very slow film, dark screens and dreary settings.

Tang Wei portrays a woman badly beaten by her husband after she spends time with a former boyfriend.  The result -manslaughter.

When her mother dies, the jail releases her (temporarily) to go to the funeral.  She takes a bus, where she meets gigolo, Hyun Bin.  At first, he thinks she may be his next victim.  Instead, this woman intrigues him, and he continues to seek her out.

Promises made by a man hunted by a jealous husband, and a woman destined to spend two more years in prison, will their destinies bring them back together?