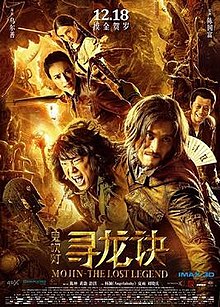 This is a great movie that is like a combination between the Indiana Jones series and The Tomb Raiders.  I found it on Netflix but I believe it can be watched on YouTube, also.

I loved the way they combined theories from the Chinese calendar, forces of the earth (wind, fire, water, etc.) and ancient Mongolian tombs.  When we watch a adventure/action film like this, most of us aren’t interested in the similarities of the sets, but in the action, death defying moments and sacrifice for love and/or money.  This movie provides all of those dimensions.

It is the highest grossing IMAX for China.  According to Wikipedia, it earned a record 27.1 million dollars, as of January 2016.  Pretty impressive.

As much as I loved this film, the beginning was lackluster.  The comedy relief, played by Huang Bo, got better as the story went along -but overall I didn’t care for his part.  Although, that isn’t saying he didn’t do a good job -I just believe the film would have been better not adding this character.

Chen Kun was born the year I graduated high school -1976.  I guess I’m not supposed to let you know how old I am -but I think most of you already have a good idea.  He has won several awards and began his career around 1999.  I really liked this actor, and feel he was perfect for this role.

This isn’t the first film I’ve had the pleasure of seeing Chen Kun in.  In 2012, he made Painted Skin: The Resurrection.  This is also a very good movie with lots of action.

Shu Qi is a wonderful actress and she holds her own as a tomb explorer, as she helps the man she loves save Hu Bayi’s brother, who is desperately trying to bring back the woman he loves, by finding the Equinox Flower.

I love action movies, and have always felt that the United States made some of the best action films.  Now, I see that China continues to capture my attention with this exciting adventure.  If you like this type of movie, I am sure you will enjoy Mojin.

Apparently, there is another film based upon the book: Ghost Blows Out the Night.  The other film is: Chronicles of the Ghostly Tribe.