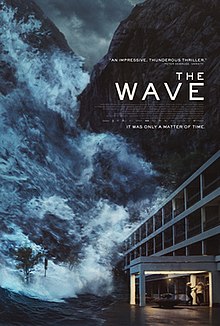 They say this film won an Academy Award for Best Foreign Film even though it wasn’t nominated.  I don’t know how that happened.

I loved this movie.  If you like catastrophe movies, like me, this is one to see.  I wouldn’t say it has the hefty detail of some American made movies, but it was well done and entertaining for its genre.

The movie is actually based on truth.  In Norway, most of the area is mountainous and rocky.  Rock slides happen like we watch for tornadoes.  They have to monitored like an earthquake and centers are dotted throughout the land to monitor this movement.  When a rock slide happens these massive stones fall into the lakes around them and can cause a tsunami.

Kristoffer Joner plays the scientist that first warns of the danger from current readings.  He could be handsome cleaned up but in this movie he looks pretty rough.  Although, he does a wonderful job.

He is most well known for his work in Villmark and The Man Who Loved Yngve.  This actor has a long list of movies over the years, and has been acting since he was 14 according to Wikipedia.  Check out the list and see if there is some more of this actor you can get in your area.

Ane Dahl Torp portrays his wife.  Her portrayal of a mother’s courage and love is brilliant.  I wonder if I would take a life to protect my child.  I believe I would, but in the moment would I?  -well, I still believe the answer is a yes.

Like Kristofer, Ane won an Amanda Award.  Her award was from her performance in the movie, Svarte penger, hvite logner.

Jonas Hoff Oftebro plays their teenage son.  Oh, he is a cutie.  You younger girls should check him out.  He was born in 1996 and has been acting since 2008.  His latest film is Borning 2.  I am unsure if we can see this on any sites like Amazon, Netflix, etc.  You’ll just have to look around.

I watched this film on Netflix.

This is the third film I’ve watched from this area, and I’ve loved all three.  I would be happy if more of them would become available.